The final weekend of BWPL Championship Two for our Men’s 1st team and we had to secure promotion and then once achieved we had a chance to win the Championship Two title, which we did in dramatic fashion…

The team would win promotion back to Div Two of BWPL for the 2019/20 season if they  beat Manchester Hawks on Saturday afternoon at Grantham Meres Leisure Centre.

The game began with us winning the swim off but we missed the first opportunity to score, both sides then had further chances for the first goal but good goal keeping and poor shot selection meant no goal for three mins then with 4.11 to play we won a penalty converted by Dávid Koncz. Koncz then scored another from a good assist from Ramon Fernandez. The qtr closed soon after 2-0.

Into the second qtr and Hawks scored first via a lob for 2-1, but goals from koncz via another penalty for his hat-trick and a goal from Adam Page meant we lead at HT 4-1. 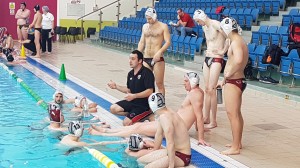 The start of the 3rd period saw Will Eggleton score from the arc on man-up then Nándor Cseh saw the keeper out of position to score a long range effort for 6-1. Hawks scored the next from the arc for 6-2 but Cameron Baker scored our seventh to end the third period clear by five goals at 7-2.

The final period and we were 8 mins from promotion. Ramon scored first before a nice tap in via a page assist meant we were nearly home at 9-2. Peter Simon in goal was frustrating the hawks attack and with timing ticking down Will scored a nice arc shot for 10-2 before another Ramon goal sealed the game and promotion at 11-2. 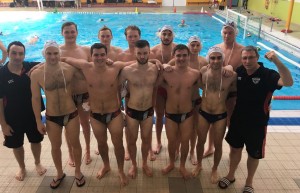 Watford 1st team after winning promotion back to Div Two…

Day two in Grantham and with promotion in the bag our attention could now turn to winning the Championship Two title..

With Worthing beating Penguins in the game prior to our match against Bristol it meant that if we beat Bristol the three teams would be on 12 points each and we would then have to win by three clear goals to take the title on goal difference.

So a big task and with only ten players it seemed a big mountain to climb especially as Bristol opened a 4-2 lead early in the opening quarter.

The game started with Nándor Cseh firing in the first of his seven goals after only 16 secs. Bristol levelled at 1-1 but another Cseh goal had us back in front at 2-1.

Bristol then hit three in a row to lead at 2-4 but with 2.34 mins to play of the opening quater a double by Will Eggleton had the teams tied at 4-4.

The second period opened with a goal from Dávid Koncz the first in a second period hat-trick. Bristol levelled at 5-5 but then our Hungarian duo took over as both Cseh & Koncz scored two each in a four min spell as we raced into a half time lead at 9-5.

Into the second half and the goals kept flowing as a goal each from Cseh and Cameron Baker meant we had scored five in a row for 11-5. But Bristol.hit back with two of their own to close the third quarter at 11-7.

Into the final period and we held a four goal margin, Bristol were aware of the need to close the gap and scored first for 11-8 but a Cseh double his sixth and seventh of the match meant we went five clear at 13-8.

With time ticking away Bristol responded with two quick goals on tbe counter attack for 13-10 and with 2.34 mins to play the title was on a knife edge a goal for Bristol now would give them the title BUT a solid defence and some good game management with the ball in our possession meant we ran the clock down to maintain that all important three goal margin and with it the Championship Two title….