Watford traveled to Sheffield last weekend for the first round of matches in this season’s BWPL Championship Three and came away with Two hard fought wins, beating Exeter 14-12 on the Saturday & York 10-9 on Sunday morning. 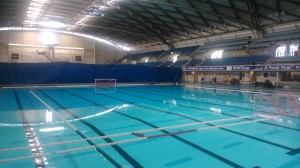 Ponds Forge all ready for the action…

Saturday’s game against Exeter was the first time the two club’s had faced each other & it was Watford who got off to the perfect start winning the opening quarter 6-0. Andy Holt hit a hat-trick inside 4 mins and with further strikes from Jack Pickford, Richard Hime & Danny Davis the team swatted Exeter aside.

Into the second period & Exeter hit back and by half time had halved the deficit at 8-4, Sam Carling an another Holt goal for Watford kept them in front.

Into the second half and Watford hit five in an eight goal quarter to take the score on to 13-7, the team’s five goals came via a four goal blast from James Warman one from the penalty spot the other was scored by Carling.

The final period saw Exeter go for broke an early goal for the Devon club was soon cancelled out by another Davis goal but Exeter wouldn’t lay down and with another four goals closed the gap at 14-12 the last goal came with 47 seconds remaining but Watford kept their nerve & closed the game out for their first win of the campaign.

Following the game the team headed back to the hotel to get ready for the evening meal, a beer in the bar & then off to a local Pizza placed called cafe Roma organised by Luke & then an early night in preparation for the game early next morning against York.

Sunday morning (9.45am) & York City a team who we had played twice last season & lost both games.

The game started with Watford on the front foot & the team took an early two goal lead via a Nandi Cesh thunderbolt & James Warman, York hit back for 2-1 with 45 seconds to play but with 15 seconds of the quarter remaining a goal from the right wing from Gianluca Valle had Watford leading at 3-1.

The second period saw York up their game & they won the quarter 3-2 to reach half time at 5-4, Watford’s goals came via Jack Pickford & another Warman strike.

The third period saw Watford score four of the seven goals in the quarter to extend their lead at 9-7. A double from Holt his first of the game and strikes from Davis & Cseh rounded off the scoring.

Into the final dramatic quarter & an early penalty conceded by York wasn’t converted by Warman & moments later Warman had another chance to extend his side’s lead but missed from close range. York sensed an opening and with three minutes to play they had leveled the game at 9-9. From the re-start York went on the attack & forced a man-up by the Watford defence stood firm & turning defence into attack the team created an opening for Andy Holt to convert from two metres to snatch the lead at 10-9 and with 1.52 mins remaining the team ran the clock down to secure their second win of the weekend. 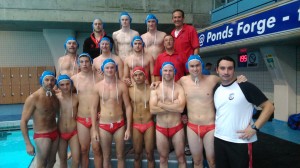 Watford will now travel to Lancaster on the 3rd & 4th October to play London Otter, Uni of Bristol & Hucknell.

Watford team for the weekend (All goals in brackets)