Promotion to Div One is on the cards with one game to go for our Watford Ladies after a win & a draw as London Orcas failed to beat Basingstoke in their second match of the day.

Going into Sunday’s two matches at QE Boys School in Barnet our Ladies were in second spot behind Orcas, with games against both Orcas & Enfield, Head coach Edi Brkovic know that two victories would see us top Div Two with one match to play at the end of June as promotion would be in our hands.

In the opening game of the afternoon against current league leaders Orcas the first quarter was a tense affair as Orcas took the opening goal before Watford’s Anna Kiss levelled at 1-1.

The second quarter began with Watford extending the lead to 3-1 thanks to strikes from Catalina Granger and Kiss again. However the league leaders were going to give up and with in five minutes they had levelled the game at 3-3 Then with only .18 second of the first half remaining Watford won a penalty converted by Fran Nice for a 4-3 lead.

Into the second half and Orcas once again levelled the game at 4-4 but back came Watford and goals from Granger & Nice had their team 6-4 up at the end of the third period.

The final quarter and again Orcas weren’t going to give the game up without a fight and inside four minutes they had the match all square at 6-6. With time running out a major four for Watford gave them a man advantage but the team couldn’t work an opening and the match finished all square at 6-6. Was that the promotion chance gone with Orcas playing next against Basingstoke it did seem that it had.

Amazingly London Orcas lost to Basingstoke 5-4 so promotion was back on the cards as victory over Enfield would see Watford top the table, with one game to go. 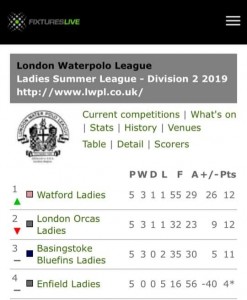 In a one sided game Watford took the first quarter against Enfield 4-1 and then extended the lead to 6-1 at half time, We had five different goal scores in the first half with Amelia spinks getting a double. 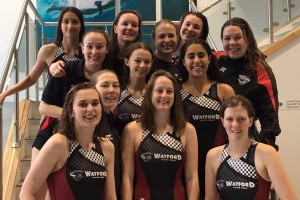