Our U15′s continued there good start to the London League Div One with two excellent wins today at Latymer Upper School beating both Northampton 6-4 and          Chelmsford 15-1.

The team are now second in table five points and one game behind leaders Latymer A. If the team can win their final three matches including a final match against Latymer then the Championship could be ON…

In the opening game against Northampton the team took a 3-1lead at half time then extended the lead to 5-1 before Northampton found a way past Eric Sirghi in goal. An exclusion allowed Northampton to get a second before Watford hit their sixth for 6-2. With game coming to a close two late goals for Northampton took the shine off an otherwise good result.

In the second match against Chelmsford it was again all oneway as by half time we had taken a 6-1 the second was very much the same as the hit scored a further seven goals for a final scoreline of 15-1.

The final round of three matches will be on Sunday 15th September at QE Boys when the team will play Northampton again along with games against Latymer A and B. 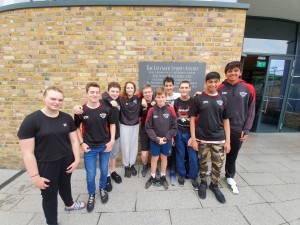