Watford U13′s had their second weekend of the season on Sunday at Latymer Upper School in Hammersmith and maintained their winning start to top the table with one round of fixtures to come in September. 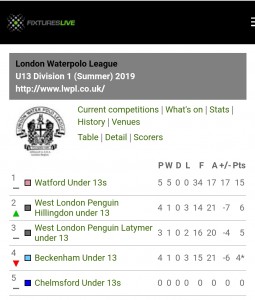 The first game was against Hillingdon. They were a good team and had two very strong players.  Our U13′s got an early lead from Dusan Crompton. Hillingdon hit straight back to make it level, but Dusan scored again to retake the lead. A goal each from Owen Dorrington and Parsa Zamani took us to a half time lead of 4:2. Hillingdon scored again but Dusan scored 2 more to finish the game 6:3. Great defence from Pit Defender Lara Atkinson and great goal keeping from Keeyan Shah kept the strong Hillingdon attackers in check.
There was a short break then we played Latymer. This was another tough game which we won 8:6. Goals by Alex Philipenki, a brace from Gethin Dorrington and Parsa Zamani and another hat trick from Dusan.
The final game of the afternoon was against Hillingdon again. This time the team experimented with being more adventurous. Making use of the new rule where the goalkeeper can go past half way we attacked with our goal keeper as an extra outfield player. After a couple of attempts this tactic paid off with Keeyan Shah getting his name on the score sheet. A special mention goes to Mackenzie Holt who saved a goal whilst covering for the keeper. This time is was Illja Crompton’s turn to score 4 goals. Gethin Dorrington got 2 and Alex Philipenki, Owen Dorrington and Dusan Crompton all scored one each.  Coach Adam Page was very pleased with the way we played and especially the high level of teamwork. 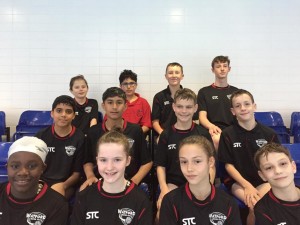