Our U17′s have progressed into the Qualification round of this season’s National Age Group Championships following the preliminary round on Sunday at Grantham Pool.

Having finished in Bronze medal position in 2019, Head Coach Edi Brkovic wants to go a couple of steps further this time round and claim that coveted Gold position.. 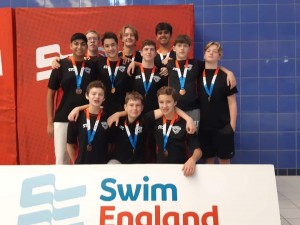 This year’s competition saw fourteen teams enter at the preliminary stage and split into three groups with six teams in group A with Caledonia,City of Birmingham, City of Sheffield and Northampton making the cut for the next round.

Watford were drawn in Group B alongside City of Manchester, Sedgefield & Welsh side Cwm Draig,.and would need to finish as one of the top two sides from the group of four to progress.

In the team’s opening game against Sedgefield we raced into a 2-0 lead thanks to strikes from Ryan Dennis & Josh Barrett. Sedgefield hit back to level at 2-2 before an Arish Patel goal 42 secs before half time gave us a slender 3-2 lead.

Into the second half and what a see-saw half it was as Sedgefied levelled first before an Oscar Cook goal had the team back in front at 4-3. The score then see-sawed 4-4, 5-4, 5-5 6-5, 6-6 thanks to efforts from Cook & Barrett and then with only .38 seconds remaining the team worked a move and fed the ball to centre forward Ryan Dennis to score the winning goal at 7-6, A great start.

Our next game was against Manchester and they had beaten Cwm Draig in their opening match so a win would put as into the next round.

Games against Manchester teams are always tough and so this one proved as well as they raced into a 3-0 lead. However with goals from Dennis & Barrett we cut the deficit to within one. With only a minute to play until half time Manchester scored a fourth but Watford’s Barrett scored again for 3-4.

Into the second half and Manchester turned up the screw and increased their lead to 3-6. Goals from Barrett & Dennis had pulled their side back with in one at 5-6 with only 1.15 mins remaining we just couldn’t find an equaliser and Manchester claimed the points.

The final game of the day was against Cwm Draig and we would need to win to make second spot in the group & qualification for the next round.

Into the second half and an early penalty converted by Barrett gave us a 3-1 lead, Cwm Draig pulled a goal back shortly after for 3-2 . But with four goals without reply Watford took the game away from the Welsh side at 7-2. The goals came via another Barrett strike and efforts from Pate, Ben Rock & Thomas Spinks.

Watford will now be joined by City of Manchester, Caledonia,City of Birmingham, City of Sheffield and Northampton along with Bridgefioeld & Cheltenham from Group A.

The eight team will now be split into two groups of four, with the qualification round to be played at Northampton on the 18th & 19th April. The top two teams in each group will progress through to Finals to be held at Basildon on the 2nd & 3rd May. 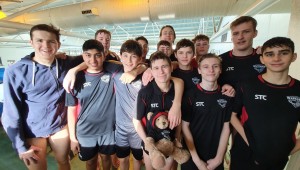