Seven teams entered this season’s tournament with our U14’s drawn in Grp A alongside Colchester & Suffolk Coastal.

In the opening game against Colchester the team were caught cold as the Essex side were quicker to the ball and immediately went on the attack winning a penalty which they converted for 0-1. We just hadn’t got into our stride and 90 seconds later we conceded another penalty but this time the Colchester player was too slow taking the penalty shot & it was reversed with half time approaching a double from Luca Roberts and an effort from Owen Dorrington had us in front at 3-1.

Into the second period and another goal from Roberts and one from Tope Fuuga had us 5-1 up, Colchester respond with a goal late on but it was too little too late and our tournament was up & running….

Our second group game was against Suffolk Coastal and in a one sided game we won 6-0 with a hat-trick from Roberts and efforts from Alex chambers, Dusan Crompton & Parsa Zamani.

Two good group wins and we were now into the semi-finals and would play the runner-up in Grp B a mixed side from Hitchin/Hertford.

In a one-sided contest we took a 4-0 half time lead with all four goals coming from Roberts but it was the team work both in defence & attack that set the platform for such a dominate performance with ever member of the team working hard, our defensive press was wearing the opposition down and forcing them to make bad decision which we countered against.

The second half saw the full bench of six players take over in the water and after an early error that saw our Herts opponents score, the team carried on the good work from the first quarter and won 2-1 thanks to goals from Daniel Ryan & Charles Ryans for a convincing 6-1 scoreline to set up the final again against Chelmsford.

The final started with the first seven back in the pool and they got off to a great start taking a commanding 4-0 half time lead, a double from Roberts and goals from Crompton & Dorrington doing the damage.

Chelmsford scored first at the start of the second half for 4-1 but Watford took charge and scored two further goals for a 6-1 final win, another Roberts & Crompton goals put the seal on a great day’s work. 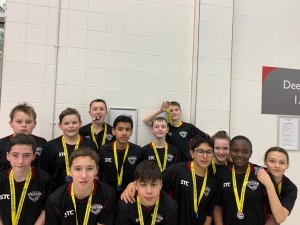 Our 13 member squad was: