Last Saturday evening (14th Dec) at the Chelmsford’s Riverside Leisure Centre our 2007 age group team our U12′s clinch the 2019 East Region Grand Prix in impressive style winning all four games.
This year’s tournament saw six teams from across the region enter the annual event but with Colchester pulling out last minute it meant the team would only have four matches instead of five.The first game of the evening was against Hitchin and the team recorded a 10-0 victory.
Next was Ipswich and another convincing win 11-1.
The third game of the evening was against Suffolk Coastal Torpedoes and the team had goal scoring off to a fine art as they recorded another 11-0 win.

With Chelmsford winning they opening matches it meant the game against the Essex side would be a tournament decider.

The final game opened with the team racing into an early 2-0 lead thanks to goals from Dusan Crompton and Owen Dorrington.
Parsa Zamani then made a great save to keep Chelmsford out before Tope Fetuga made it 3-0. Ilija Crompton and brother Dusan both scored late on as the team took a 5-0 half time lead.

Into the second half and Watford took the game out of Chelmsford reach as eight goals gave us an impressive 13-0 lead. With the game coming to a close Chelmsford scored to finish the match 13-1.
Dusan and Owen scored four each in the final, Tope and Bertie Dix two each and Ilija one.

With only seven players attending on the evening and each played every minute in all four games it was a very impressive performance and it just goes to show that attending multiple regular training session has paid off. 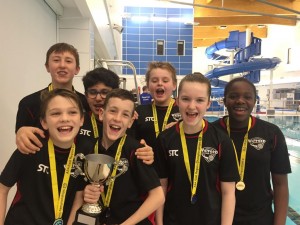 Our Stats for the evening were: 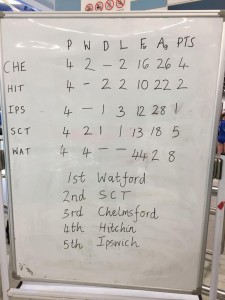 East Region Final results, an impressive set of Stats for our U12′s…