Traveling to Beckenham on a Tuesday evening for a first round match in the London League Referee’s Cup against their 2nd team and with a deficit of sixteen goals to overturn due to the competition’s handicap scoring system was going to be a difficult task.

But the Men’s team of Watford who were the 2018 Runner’s up in the Cup competition last season losing out to Beckenham’s first team weren’t going to let that stop them from making a bid for a quarter-final berth.

The team needed to score an average of four goals a quarter if they were going to overturn that Sixteen goal deficit and the opening stages of the first quarter it looked like it was going to be a tough ask as the Beckenham keeper made some great saves to frustrate the Watford attack however as the quarter progressed the team got into their stride and won the opening quarter 3-0 (13 behind) thanks to a double from Zac Corcoran and an effort from GB U19′s trailist Adam Page, a good start. 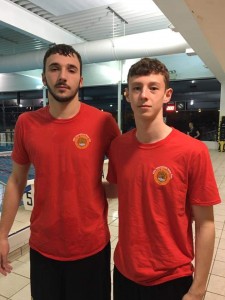 The second period started with Watford extending the lead to 5-0 (11 behind) with goals from Steve Brassington & Sam Hanrahan but a defensive lapse allowed Beckenham to sore from the wing to make it 5-1 (12 behind). Back came Watford and with three more goals they reached Half time at 8-1 (Nine goals behind).

With third period started with Watford’s Harrahan & Page scoring to make it 10-1 but another lapse in defence allowed Beckenham to score for 10-2 (8 behind) but then with plenty of time on the clock the team stepped on the gas and scored six further goals for 16-2 (2 behind) the goals came via doubles from John Pickford & George Sadler, Jack Pickford and another from Page.

The final quarter and Beckenham needed to go for broke and an early attack forced a major foul from which they scored from the man-up 16-3 (3 behind). Watford then on the next attacked won a penalty converted by Corcoran for 17-3. Back came Beckenham and a quick fire double had then four in front at 17-5. With the clock ticking down 2.43 to play Watford needed to go for it. A goal from John Pickford after forcing their keeper into an error had us three behind. from the restart Beckenham had possession but Sam Harrahan forced a change of possession and a swim from half way to score had the team two behind at 19-5. With 1.29 mins to play Beckenham called a time out to re-group but from the restart an error gave Watford possession and charging forward another goal from Harrahan had the team within one goal at 20-5. With the clock entering the final minute Beckenham had an attack but once again Watford repelled this and moving into attack the team worked the ball round to the right wing were Adam Page had the calmness to lob their keeper for the equalising goal at 21-5. With 23 seconds to play Watford resisted any further Beckenham attack and with seconds to play a final chance was created but was missed as the game finished 21-5. A draw overall at 21-21 but under the Competition rules the away team progress in this situation.

Watford have now set-up a quarter-final home game against the winners of the Enfield v Bexley match for a place into the 2019 Semi-Finals.