Everything a wrestling or boxing fan could have hoped for was on show at Whitgift on Monday night. It’s just a shame the Watford 2nd team travelled down to Croydon to play water polo!

An ineptitude of referees (which included a Croydon player) eagerly assisted by the Croydon team in almost every decision, ensured that Watford got plenty of practice playing man-down, but rarely got the chance to show their prowess in man-up situations. And the absence of a timeclock and scoreboard meant we were all kept guessing about when a quarter would actually end; normally when Watford was in a scoring position. But I’m giving away the plot here!

It had all started off so well, despite Croydon kicking off the scoring with a long shot that Steve could do nothing about. Will Eggleton got Watford back into the match, with a long- range goal of his own. Steve Brassington then set him up for a second, which he bounced past their keeper.

Despite a string of good saves from Steve, Croydon quickly left Watford in their wake with four goals, with no reply from us. The first quarter ended with Watford trailing 5-2.

Good defending from William Morris prevented Croydon from extending their lead early on in the second quarter. However, while the man-down practice was starting to pay dividends through a solid Watford defence, Croydon managed to sneak in two more goals during this quarter. Watford failed to score despite numerous attacks.

Watford started to get back into the game in the third quarter, as Will picked out John Pickford, who fed Adam to score into an empty net. Croydon replied with another goal, but Alun Dorrington responded with Watford’s fourth of the night. Yet another man-down allowed Croydon to level the quarter, and extend their lead to 9-4. 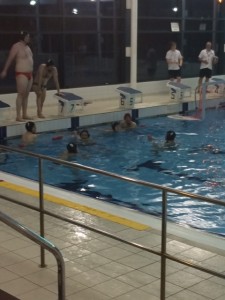 The team getting ready for the final quarter v Croydon 2nds…

Enter the final quarter. Steve stopped Croydon from running away with the match with a series of reaction saves, helped by some determined defending from Brasso, often encumbered by the grasping hands of a Croydon player around his neck. After saving yet another man-down, a Watford counter released George to get Watford another goal. And then in a final attack, George found John well-placed to score Watford’s sixth goal. It’s worth noting that we actually won this quarter 2-0 to end the night with a very respectable 9-6 loss, and a few bruised ribs.

Its also worth noting that the team won the second half 4-2.