Our U17′s have progressed into the Qualification round of this season’s National Age Group Championships following the preliminary round on Sunday at Grantham Pool.

END_OF_DOCUMENT_TOKEN_TO_BE_REPLACED

Last Sunday at QE Boys School saw the start of the Winter London League for both our U18 Ladies and Senior Ladies team.
END_OF_DOCUMENT_TOKEN_TO_BE_REPLACED

END_OF_DOCUMENT_TOKEN_TO_BE_REPLACED

Last Saturday evening (14th Dec) at the Chelmsford’s Riverside Leisure Centre our 2007 age group team our U12′s clinch the 2019 East Region Grand Prix in impressive style winning all four games.
END_OF_DOCUMENT_TOKEN_TO_BE_REPLACED
Thursday 12th December at Hab’s Boys School was a vary good night for the Men’s 1st team as they won the London League Referees Cup beating Guildford 26-15 (22-3 without handicap) a fourth success in Nine year’s winning in 2011, 2012, 2015 & 2019.
Having made the final in 2018 it was good to go one better in 2019.
END_OF_DOCUMENT_TOKEN_TO_BE_REPLACED

The middle weekend of BWPL Phase One is always the most critical and so it panned out for our 1st team as they won a brutal encounter against City of Bristol (15-6) on Saturday lunchtime followed by a close fought win over Worthing (6-4) on Saturday evening.

The shine was taken off the first day’s results as the team fell to a (6-10) defeat to Scottish side and Div One leaders Caledonia on Sunday morning. The weekend began with what turned out to be a brutal encounter against City of Bristol as Watford players Akos Sahin-Toth suffered a broken nose & Tom Kelly a black eye as Bristol tried to muscle their way to victory. 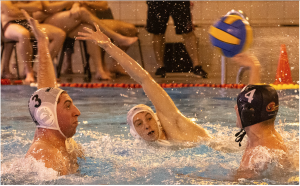 Watford took an early two goal lead thanks to efforts from American centre forward Zach White and Cami Baker before Bristol managed to register an effort but following a Major foul Bristol halved the deficit at 2-1 before Watford hit back with goals from Tom Kelly & another White goal either side of another Bristol effort had Watford 4-2 up and  with 42 seconds of the quarter remaining a goal from Scottish Centre forward Josh Brown had his side in control at 5-2.

The three-goal margin was maintain in the second period as the score moved to 7-4 at  Half-time and increased to four clear by the end of the third period. 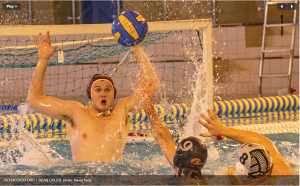 Five goals in the final period without reply saw Watford claim maximum points with a 15-6 victory as the weekend got off to a good start.

Saturday evening’s game against South coast side Worthing was a low scoring affair as Worthing took a two goal first quarter lead and maintained the margin at half time 2-4, Watford goals came via Brown & White.

However, the second half was a complete turn-around as first Watford level the game up at 4-4 (White & Warman) by the end of the third period and then won the final period 2-0 (Andy Holt double) to register a 6-4 win and claim maximum points for the day.

On to Sunday and an early morning start (9.00am) against Caledonia, another close game had the sides level at 2-2 after the first period. Watford then snatched a slender lead at Half time 4-3 thanks to a brace from David Koncz and efforts from Andy Holt & Zach White.

Into the second half and Jack Warman extended Watford’s lead to 5-3 but then the team collapsed as Caledonia hit five un-answered goals to lead 5-8 with only 1.31 of the game to go. Koncz pulled one back but it was too little too late as Caledonia closed the game out with two late goals for a 6-10 win.

The defeat took the shine off a good Saturday but with two games to go in late November at Habs Boys school against Exeter or Welsh Wanderers a draw or win against either side will see Watford make Championship One for the second half of the season.

For our Men’s 2nd team the Saxons their final round of matches in Walsall were very competitive as the team put up an incredible fight as they wanted to finish the season on a high.

Having lost their first Five games of the season and with it the prospect of promotion it would have been easy for the team not to take their two remaining games seriously but with four teams all level on five points each it was important that the Saxons put up a fight against Sheffield Dolphins & Caledonia Storm.

Saturday’s game against Sheffield Dolphins saw 25 goals as the Dolphins edged it 13-12. The scores were level at 3-3 after the first quarter after Dolphins had been in front at 3-1 and then 5-3 before the team fought back to level the game at 5-5 on half time.

The Saxons then edged into the lead at 10-9 at the end of the third period before Dolphins hit back to take a 13-11 lead mid-way thorough the final period but with 1.54 of the game remaining the Saxons closed within one at 13-12.

Sunday’s game against Caledonia Storm their 2nd team followed a similar pattern to Saturday’s game but this time it was the Saxon’s who went in front 2-0 early in the first quarter only to be pegged back and then were 4-2 behind before a late goal from George Sadler closed the gap to within one at 4-3.

The second period saw both sides score three each as the scores moved up to 7-6 in Caledonia Storms favour at Half-time. A Ben Simkins double & an effort from Veli Rashkov making the score sheet.

Into the second half and another eight goals, four for each side moved the scores to 11-10 to Storm. A Sadler double & efforts from Simkins & Rashkov for Saxons.

The final period and was one side or the other going to hold a lead and win the match. Two early goals for Saxons via Matt Irish & Captain Steve Brassington had the Saxons in front at 11-12 but a quickfire double from Storm had them back in front at 13-12 with only 4 minutes to play.

The next play saw Saxons concede a major foul & Storm called a time-out which was well defended by Saxons & then Coach Steve Chambers called time-out for his side. From the re-start Sam Parry found space on the Arc & scored to level the game again at 13-13.

With 2.17 to play a goal via Zac Corcoran had us in front at 13-14 and then on the next attack we won a penalty which Ben Simkins took and hit the post, a big opportunity gone. From the re-start Storm levelled and then took the lead (15-14) in only 18 secs and with only .36 secs remaining it looked like our chance of a result was gone however from the re-start Corcoran swam forward with the ball right into goal & levelled the game again at 15-15.

With .21 seconds of the match remained and Caledonia Storm had possession and came forward looking for the winner a shot from 5m hit the bar and fall behind our keeper Chris Jones not knowing where the ball was he fouled a storm player & conceded a penalty which he duly saved and with-it Saxons won their first point of the season after seven gruelling games.

So for the Saxons to play BWPL in the 2020/21 season they will need to re-qualify in April for a place in next seasons Championships.

Another long exhausting trip for our U15′s Girls as they also had their NAG’s Competition in Sunderland but the reward was a fifth place finish for our young side.
END_OF_DOCUMENT_TOKEN_TO_BE_REPLACED
A long exhausting round trip to Sunderland for the 2019 National Age Group Championships proved well worth while as our Boys team came home with the Bronze Medal.
END_OF_DOCUMENT_TOKEN_TO_BE_REPLACED

On Sunday at QE Boys School our U15′s were crowned London League Div One Champions for 2019.

The team went into Sunday’s final round of matches trailing Leaders West London Latymer B side by five points and would need to win all their remaining three matches including a final league game against Latymer B side to pull level on points if Latymer won one of their remaining games against Chelmsford then the title would be shared.

A loss or a draw in games for either side would see the other win the Title outright..

The afternoon’s matches opened with Watford taking on Northampton and the team got off to a great start winning the opening half 5-2. The second half saw both sides fight out a 4-4 draw as we won the game 9-6 a good start to the day.

Next up was a game v Latymer A side and in a one-sided affair we won the match 13-0 with Arish Patel & Dylan Sunday scoring four apiece.

Two from Two and our Championship challenge was on with Chelmsford taking on Latymer B next all the Watford players & management were cheering on the Essex side.

In an opening half Chelmsford took the game to Latymer B and lead 3-1, into the second half and Latymer stormed back to level at 3-3 and with eight minutes remaining each side then traded goals up to 5-5 with 1.58 remaining. With the clock ticking down chances went begging for both sides to win until with only .08 secs remaining a goal for Chelmsford clinched the match & opened the door to Watford winning the Championship title outright.

So with Latymer B losing their could still win the title by beating watford in the final game but Watford would need to win against Latymer to clinch the title, all was set for drama.

The final game of the season began with watford taking the lead via another Arish Patel goal and three mins later a man-up advantage allowed watford to double the lead at 2-0 with a goal from Jack lesson. Half time was reached soon after at 2-0.

Into the second half and Latymer came out all guns blazing and scored to half the deficit at 2-1 then with further chances that Latymer should have taken watford broke forward and re-established the two goal margin with a fine effort from Dylan Munday. With time ticking down Laytmer had a penalty which wasn’t converted and from the break away Watford’s Sabrina Radzik-Rahman scored to take the game & the title away from Latymer at 4-1.

All round a great day for the team & Club and Head coach Edi Brkovic was extremely pleased with his sides performance especially as our U13′s were also crowned London League Champions last weekend as well.